There cannot be a better game to start this blog off than the one this weekend!

Chelsea vs Tottenham is a London derby which in recent years has not only increased in intensity but also one that has a lot more at stake. Spurs have gone from a top 10 team to one that has managed to throw its weight amongst the top 6 all without winning anything. Many fans and critics argue (mostly Spurs fans) that they are the best team in North London if not in London, when it has been more than a decade since Spurs last won a cup of any sorts. While Chelsea usually find it difficult to win at White Hart Lane, Stamford Bridge is an entirely different story.

Chelsea have had what I would say is an inconsistent season but that is a discussion for another post. The game follows an international break (why?) both teams having won their last games to progress to the semifinals of the FA Cup. Chelsea need to win this game to stand any chance of reaching the top four while a Spurs win would increase the gap to 8 points.

Chelsea approach the game with a few doubts in selection with Courtois and Christensen both facing late fitness tests. While Caballero has proven himself when called upon this season, Cahill has been anything but reassuring. With Luiz out for the next three weeks and Ampadu out for the season we need Christensen to be fit or for Rudiger or Azpilicueta to play in the center of the three with Cahill playing on the left or right. Other than that Chelsea need Hazard to turn up for this one and Morata to follow up his good performance against Leicester with another great one.

Tottenham have the same objectives as Chelsea for the remaining season which are to finish in the top four and try to win the FA Cup. While Harry Kane may or may not make it for the game on sunday, Tottenham have no injury problems. Many believed Spurs would face problems without Harry Kane but the players have turned up in the strikers absence to win convincingly although Chelsea is whole different proposition. While Eriksen has been recieving several plaudits, the biggest threats in my opinion are Son and Dembele. Son has had an incredible season so far and Dembele has been imperious in recent weeks. 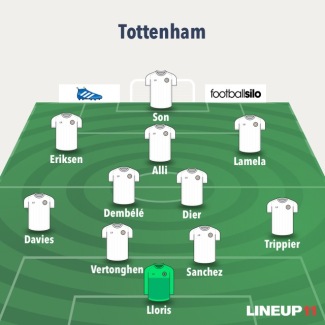 This is a massive game in the race for the top four and with only eight games to play a lot is at stake. The game should be decided in the midfield and according to which Chelsea show up though it is Spurs and it is Stamford Bridge and with so much at stake the blues always show up.