Chelsea play their final game of 2018 at Selhurst Park against local rivals Crystal Palace. Palace sit 14th in the table having won 5 drawn 4 and lost 10. Palace started the season off poorly but in recent weeks they have improved having won their last three and having beat Man City away 3-2 in one of them. Chelsea have already played Palace at home this season having beat the Eagles 3-1 in November. On the day Morata scored two while Pedro added a third. Townsend had added a consolation goal for the Eagles. Palace are in a period of better form and away at Palace Chelsea have found it tough having lost 2-1 there last season.

With the second half of the season officially beginning this weekend Chelsea need to get off to a winning start as we had a horrid second half last season that saw us drop from 2nd to 5th in the table. Watford was a tough game and Palace should be similar as they defend properly hand have plenty of pace to hurt Chelsea on the counter. With Liverpool and Arsenal playing each other Chelsea need to get a win to benefit in the table and open or bridge a gap either way. We are heavily dependent on Hazard at the moment and if he has a good game we should win but our defence needs to be equally up for the task.

Morata returns for selection this weekend and it is anyone’s guess who Sarri will chose to lead the line. Hazard has done well and I am guessing he could start up front once again. With Pedro and Hudson-Odoi out for the game Loftus-Cheek could get a chance playing on the wings. I think Giroud might get a start with Hazard and Loftus-Cheek on the wings and Emerson play left back. Barkley should also get a chance ahead of Kovacic.

Hodgson has a fully fit squad to select from with only Benteke out due to injury. Palace should play a similar team to the one they had against City as it worked so well for them. 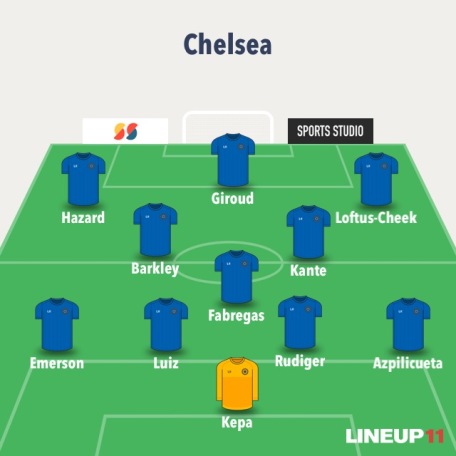