A chance to bounce back.

Amongst all the doom and gloom of the loss to City we might forget that we are still technically up for three trophies this season. A quick chance to bounce back from the loss comes in the Europa League against Swedish side Malmo in the Round of 32. Malmo are in their off season right now having finished 3rd in the Allsvenskan last year. Malmo are managed by Uwe Rosler who is City legend and also coached Wigan a couple of seasons ago. Malmo are a Swedish club with rich history and also take credit for introducing a certain Zlatan Ibrahimovic to world football. Uwe Rosler has coached his team to be solid defensively and largely play on the counter and considering Chelsea’s recent results Rosler will most likely do the same today.

City is the past now for Chelsea as we look to maintain our goal for a Europa League trophy and an alternative route to the Champions League for next season. Top four is still a viable option but it would be good to win the Europa League and use it as another key to get into the Champions League. In his prematch press conference Sarri mostly talked about the same topics as usual while Pedro said that the players were behind the manager but admitted that Sarriball was a hard to understand. Chelsea face off against United at home in FA Cup on Monday and so an away win would be a great way to build some confidence up for the games ahead.

Chelsea will be without RLC who has been left at home because another back issue while Alonso has been rested. Cahill and Drinkwater remain at home. Even though Chelsea have United on Monday Sarri should select a strong team and so Kepa, Azpi, Christensen, Luiz, and Emerson should start at the back. I would like to see Zappacosta given a chance but since we are away Azpi will probably start. Kovacic should replace Jorginho in the regista role with Barkley and Kante starting upfront although Ampadu could start ahead of one of those players. Up front Hazard Higuain and CHO should start because they are the best chance we have at killing off the game and really no one else deserves to start. 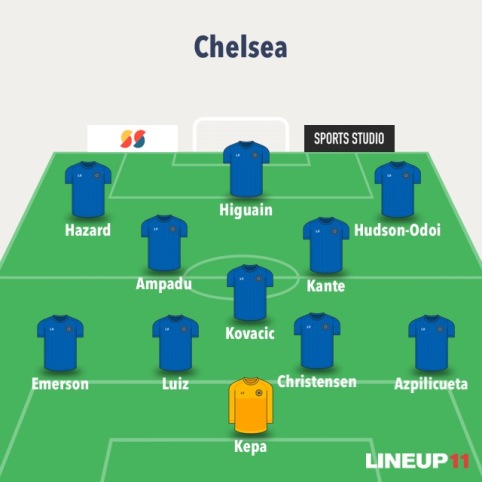 Chelsea, Europa League, Preview, Round of 32