A return to the Premier League as we head into a break.

Football packed months come to an end from next week as we head into an international break. Several clubs have already gone on holiday but Chelsea still have to travel to Liverpool to play Everton in the Premier League. Chelsea reached the quarter-finals of the Europa League and where after Friday’s draw we found out that we will be facing Slavia Praha. For now we return to our main route into the Champions League which is a top four finish. Everton have won only 1 of their last 5 games while they did manage an impressive draw against Liverpool. The draw was followed by a poor performance against Newcastle which saw them give away a 2 goal deficit to lose 3-2. Chelsea drew the reverse fixture 0-0 and will be hoping that they leave Merseyside with nothing less than 3 points. A win for Chelsea could see them move into 5th level on points with Arsenal who are 4th as Arsenal do have a +5 goal difference.

Everton are inconsistent and while they can be really good they also can be really poor and so Chelsea need to carry their good form into this game and head into the International break with a vital win.

Sarri rotated several players for our trip to Kyiv. Kepa should start in goal while Azpi, Christensen, Luiz, and Emerson should start in defence. Jorginho, and Kante should be accompanied by Barkley as Kovacic, and RLC had 90 minutes in Kyiv. Hazard, Higuain, and Pedro should start upfront but if Higuain is still ill then Giroud might get the nod. In an ideal word I would want RLC, and CHO to start but considering their 90 minutes they are more likely to feature of the bench.

Jagielka has a knock and Zouma cannot play against his parent club who happen to be Chelsea so Mina is more likely to start in the defence. Other than that Silva should have a decent squad to select from. 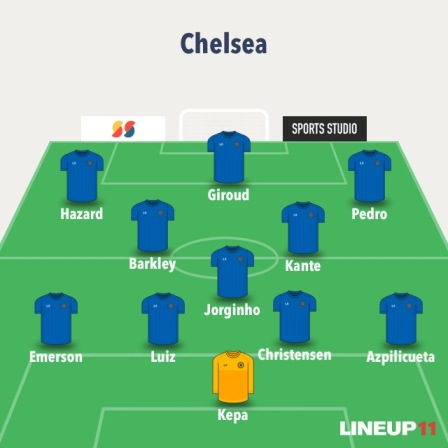 Everton do play well but it is crucial Chelsea win this game! COME ON YOU BLUES!!!!