Go into the international break on a high!

Chelsea travel to Southampton for gameweek 8, as we look to continue are winning momentum. Having started poorly Southampton then picked up some form but have recently suffered two defeats in a row as they sit 14th in the table. Hassenhutl was a revelation during the latter stages of last season as he guided Southampton to safety and while this season has not been consistent the Saints should have enough to avoid the relegation zone and possibly push for a top 10 finish.

Chelsea played Lille in France during the week and Lampard got his first win in the Champions League with a scoreline of 1-2. Since it was an away trip and Lille are good opposition Lampard did not rest too many players. Over the last few seasons we have done well away at Southampton and we should be able to continue that form.

Lampard will assess Kante due to having played the 90 minutes in France while Rudiger and Emerson are still out injured. Kepa should start in goal, Christensen and Tomori should start in the centre back positions with Alonso and Reece James starting as full backs. Jorginho, and Kovacic should start in midfield with Mount supporting them with a deeper role. Hudson-Odoi, and Pulisic should start on the wings although I think Pedro will or Willian could start ahead of Pulisic. Tammy should be upfront.

Soares is out due to injury, and Djenepo has been brilliant during the season is also out due to injury. Southampton should employ a 3-5-2 formation as they look to play on the counter against Chelsea. Boufal, Redmond, and Ward-Prowse are the players to keep an eye on while Bertrand can always deliver from crosses. 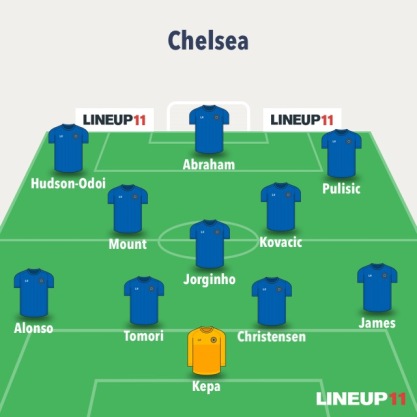 Whatever the lineup fielded Chelsea should win this to continue their momentum and hopefully move up the table. COME ON YOU BLUES!!!