With Ziyech already heading to Stamford Bridge come July, and Werner 99% of the way across the Channel, Chelsea are heading for a brilliant transfer window. The next players rumoured to be attracting Chelsea’s interest are Kai Havertz from Bayer Leverkusen and Ben Chilwell from Leicester City. In upcoming articles we will discuss Werner, Havertz and Chilwell and see if they are worth the hype and what they can offer to Chelsea next season.

Timo Werner is all but done as reports from Raphael Honigstein state the feasibility of a medical is the only thing keeping the transfer from going through. The Timo Werner news exploded last week on Thursday as all of a sudden Chelsea were ahead of Liverpool and with the blink of an eye they had agreed terms and paid the release clause. Werner is a forward and can play down the middle, as a front two, or on the left wing where he has played most of his games this season. That versatility is something Lampard seems to be chasing with Ziyech and Havertz multi faceted as well.

Who does Werner replace?

There is no exact answer to this as it may seem that Werner would be fighting with Tammy for a place upfront but he could easily play alongside him or play on the wing in place of Pulisic or Hudson-Odoi. 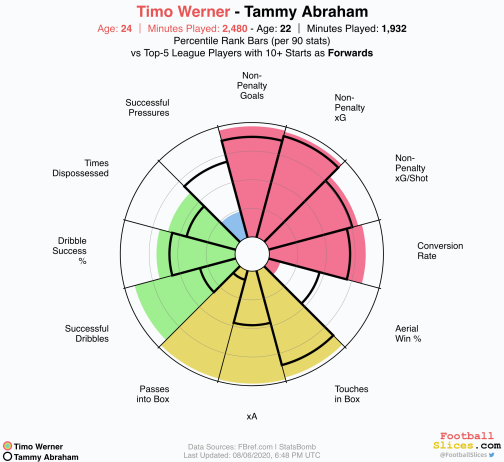 In these comparisons, the bottom chart is Werner’s current Bundesliga stats for the 19/20 season and the overlapping chart is Tammy’s stats for the current Premier League season. Right of the bat we can see that Timo is better in terms of overall play as he provides both assists and goals. Although when you isolate their primary goal which is putting the ball in the back of the net they are both very good. It’s clear to see that whether one starts or both start together Chelsea will have two very good goal scorers up front. The pressures stat is skewed mostly because Lampard emphasises a high press and asks that from all players involved. 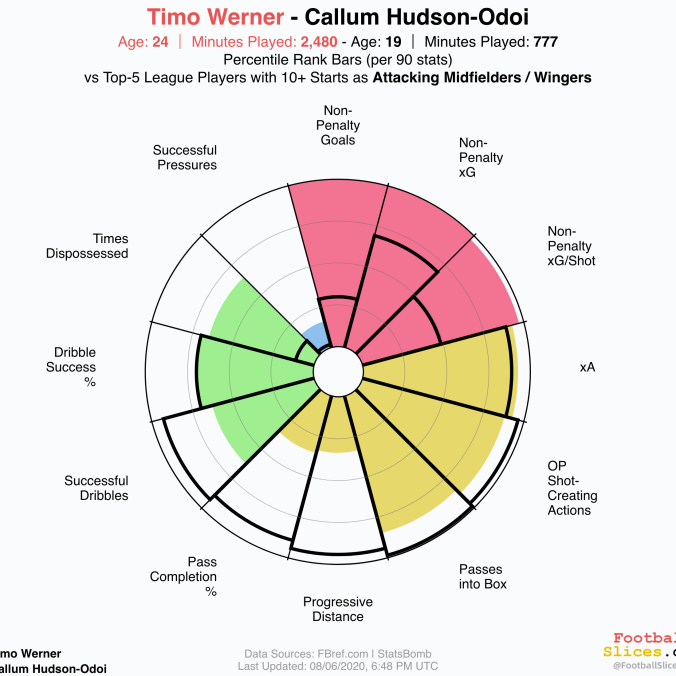 I next compare Timo to our wingers that could play on the left in Hudson-Odoi and Pulisic using the same stats from the current season although Timo’s have been adjusted to the Attacking mid/winger role. Timo has been even more lethal from the left wing position this season but these stats show that Pulisic and Hudson-Odoi will provide ample competition and quality to Werner and the squad. Hudson-Odoi only has 777 minutes to his belt and while his goalscoring is no where near Werner’s or Pulisic’s it is his potential for assists and creation that put him ahead of the two. CHO is a brilliant dribbler and from what we have seen of him on the right wing this season he has been crucial in creating chances while on the pitch. Pulisic on the other similar to Werner offers both. The American is a better dribbler as we have seen first hand but also provides goals at a similar rate while also helping out with creation as well.

Pulisic and Hudson-Odoi are both younger than Werner and Ziyech and while Ziyech and Werner will most likely be starters come next season the previously mentioned players have much to offer going forward. Injuries have hampered the 19/20 season for Pulisic and CHO but the stats, and anyone who watched them play showed that they are very good and are tipped to end the season in strong fashion.

As a side note I also compared Willian to Werner as the Brazilian does have the most minutes on the pitch than the likes of Pulisic and CHO. The comparison only proved my previous opinion on Willian that he is all show no end product. The Brazilian is a better dribbler but also gets dispossessed more often. Willian falls short on assists and is way behind when it comes to goals and so Werner is a massive improvement on Willian.

Werner is heading to Chelsea and while he will be a starter his presence on the pitch should only benefit Tammy, Pulisic, and CHO whether they are challenging for game time or playing alongside the German. Add Ziyech and our future is very bright!