Kai Havertz is on most Chelsea fans minds right now in terms of a player we really want the club to sign. Yes, the need is greater at left-back, and central defence and probably goalkeeper but the 21 year old German footballer from Bayer Leverkusen is they type of player you do not miss out on if given a chance. That chance is what Chelsea have with the likes of Bayern, Real Madrid, and many clubs around Europe cash strapped. All signs do point to the fact that Chelsea could be signing Havertz in the near future and so to day we will look at what he could offer and where he could play in this Chelsea team.

Havertz is predominantly a midfielder whether attacking or more central and that’s where he spends most of his time on the pitch. Chelsea’s midfield consists of the likes of Kante and Kovacic who are more defensively suited while the likes of Mount, Barkley, and Loftus-Cheek are used more as attacking eights. The CDM role is nailed on to Kante or if need be Kovacic while Gilmour is also a possibility and so that is not a position Havertz or Chelsea would be looking at. Central midfield is where it gets interesting. 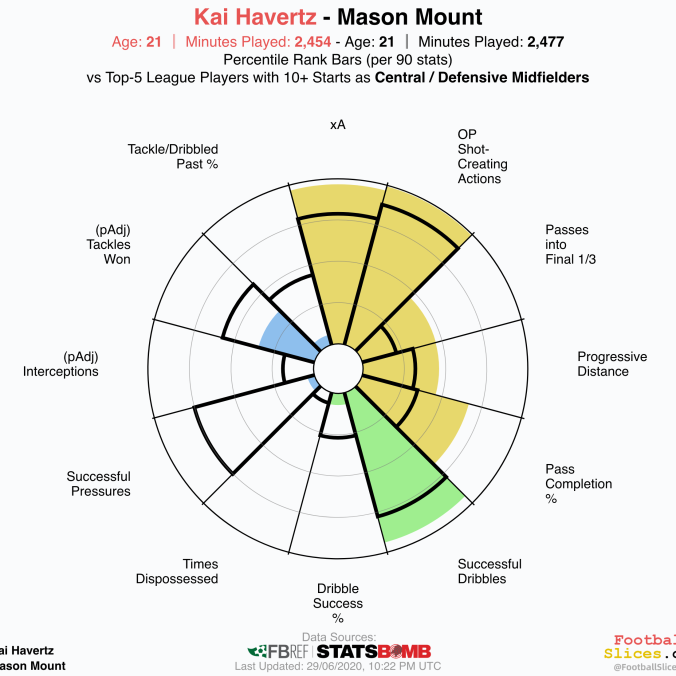 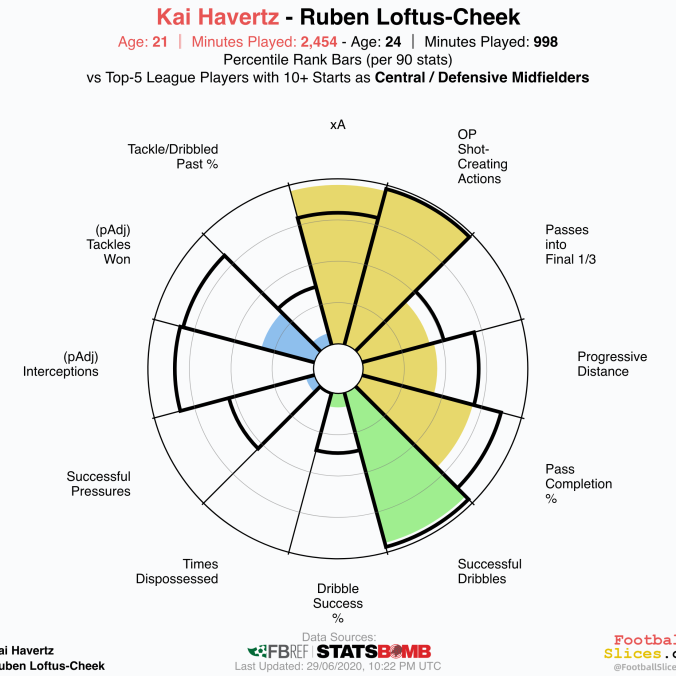 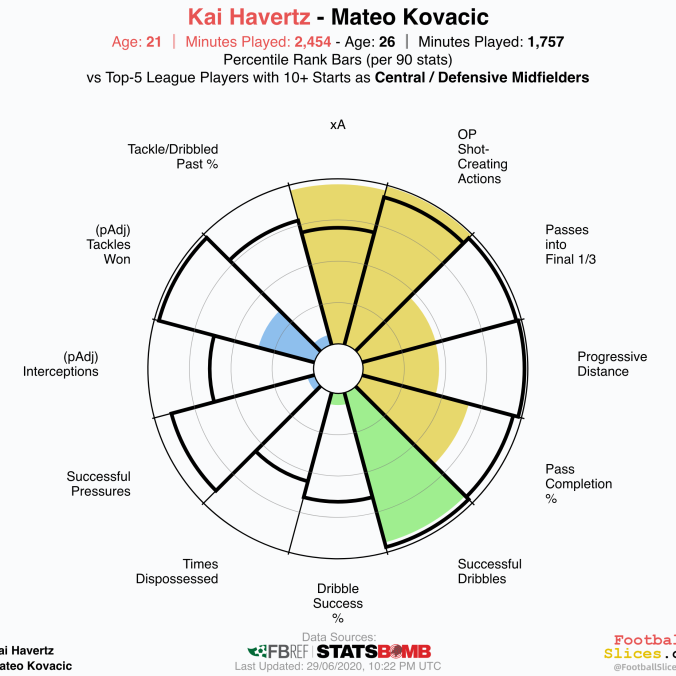 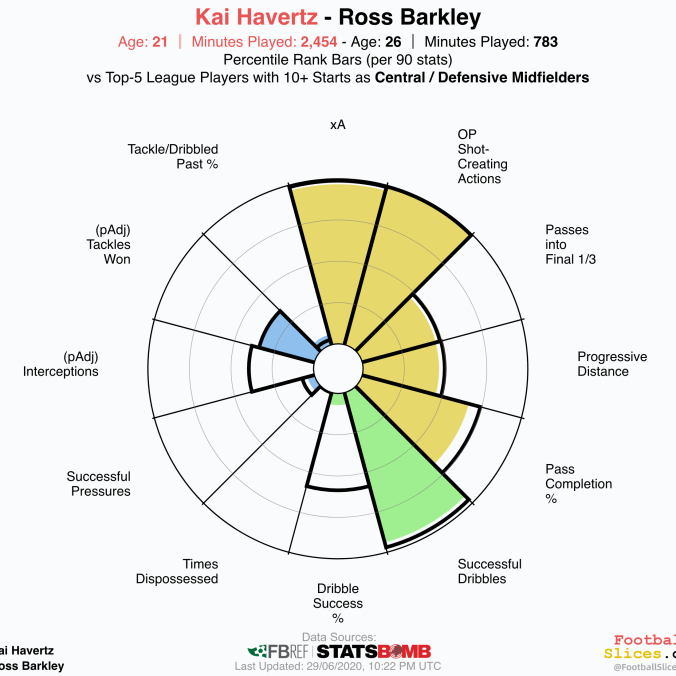 What first stands out is that Kai does pretty well in terms of forward play when in a central position but where he seems to lack heavily is in the defensive aspect where the likes of Mount, and Kovacic excel in. Now the likeliest scenario is that one of Kovacic, Mount, or Loftus-Cheek would start alongside Havertz in front of someone like Kante. Kovacic and Mount specifically would be able to do the dirty work alongside Havertz while the German links up play. If you start Loftus-Cheek and Havertz together then you get two very tall dynamic midfielders who will be extremely tough to handle although defensively Chelsea might lose something there. Another factor to take into account is that Chelsea under Lampard are a pressing team and so if you compare any player from our squad the chances are that our pressing stats will be significantly higher than others, so Havertz at 21 could easily improve in that area. Barkley is perhaps the most similar to Havertz although the amount that the two have played is very different and we all know about Barkley and his consistency. 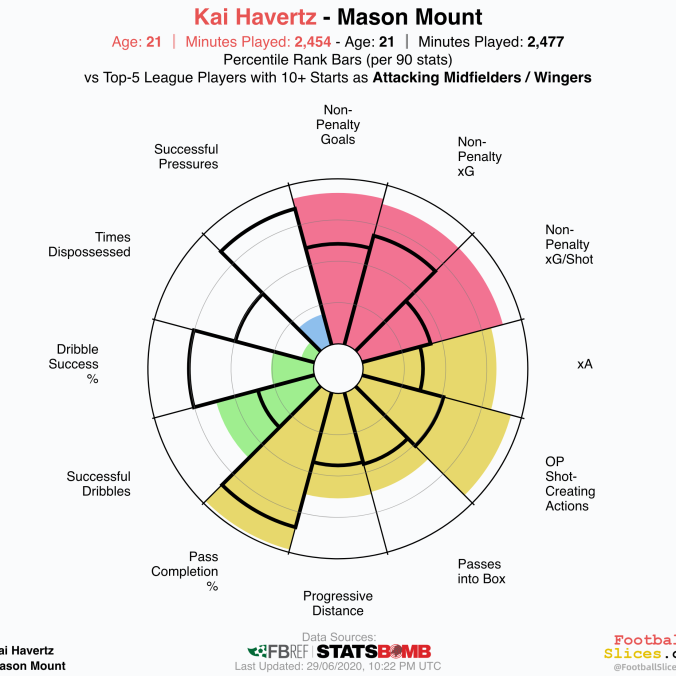 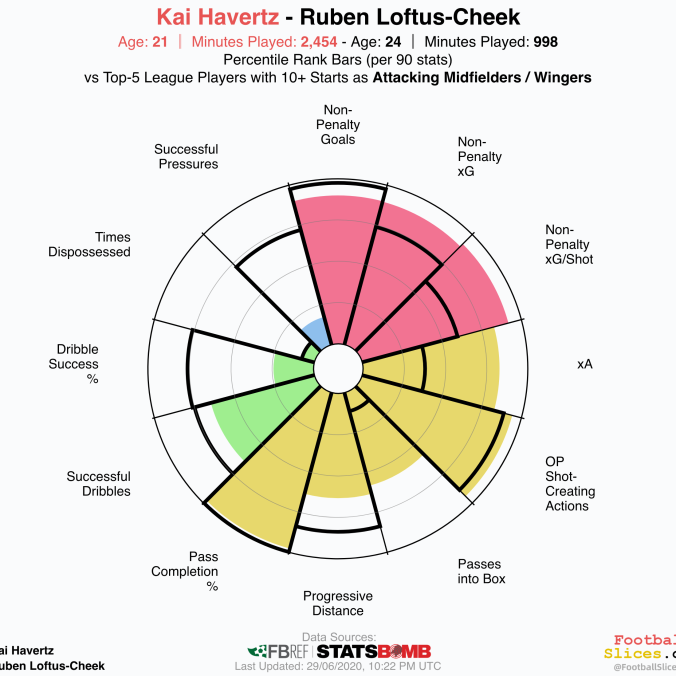 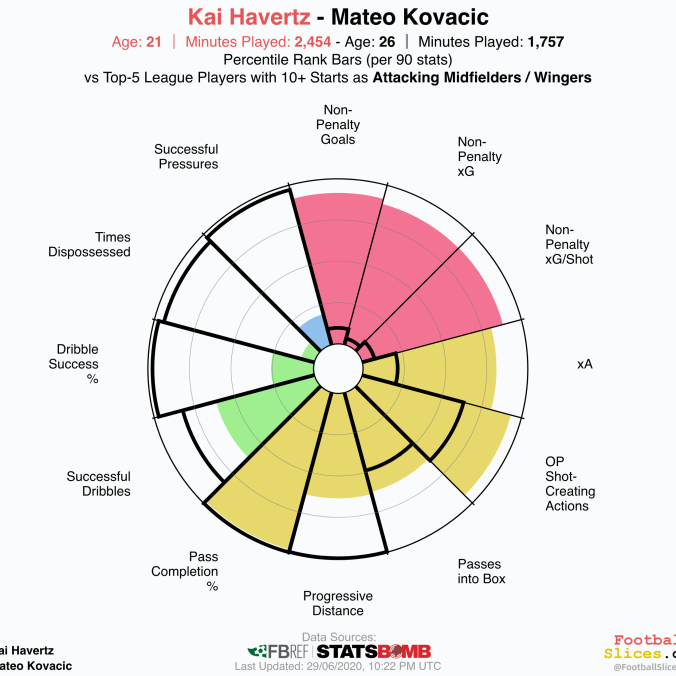 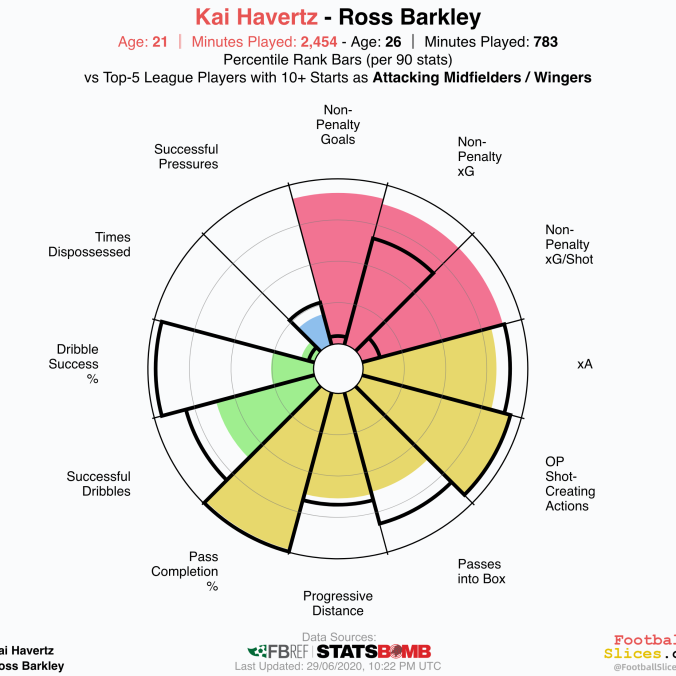 Attacking midfield in and around the winger and the striker is where Havertz excels in. Two players who fall well short of Havertz in this area at least in the attacking sense are Kovacic, and Mount. The one thing I can say for Mount is that he isn’t often given the freedom to move forward and is usually found pressing the the opposition players which might affect his output in the attacking sense. Kovacic on the other hand seems like the perfect partner alongside Havertz as he blows the German away in a defensive aspect. Loftus-Cheek is very similar to Havertz in this position according to the stats although his fitness record casts a doubt upon him as he only just got back to playing. Barkley matches and beats Havertz in terms of passing and assisting but again the difference in game time between the two is huge and there is a difference in consistency as well. 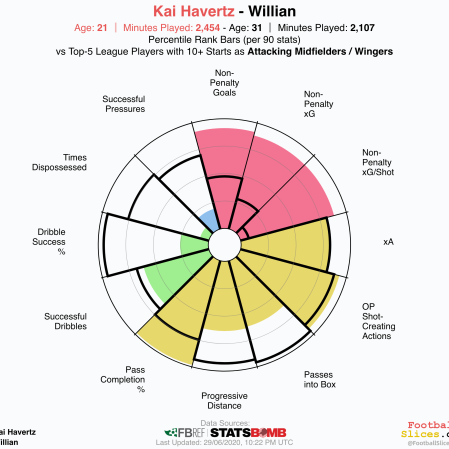 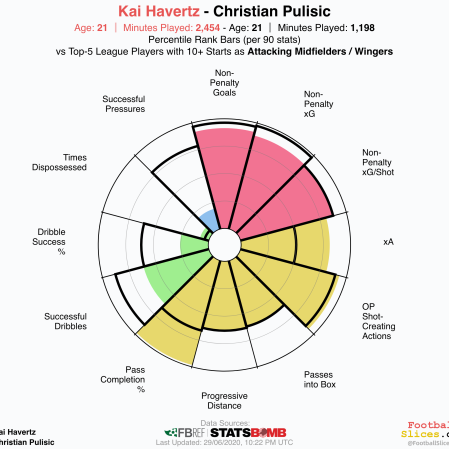 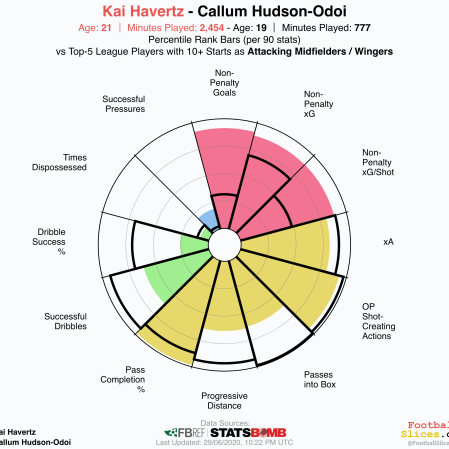 The wings is not an area Havertz would be heavily used in especially with the likes of Pulisic, Hudson-Odoi, and Ziyech there along with Werner as a possible option. Also Havertz’s creativity would be limited from a wide position. It’s still a comparison worth making though. Now disregard the pressing stats because like I said every player on our team will have a higher pressing stat due to the way we play. Willian matches Havertz in terms of passing and assisting but where the Brazilian lacks is goalscoring and it doesn’t take stats for one to make that analysis. Pulisic continues to astound me as to how good of an all around player he is at 21 and he can only get better although Havertz arrival would not be a threat to him rather Havertz playing in the midfield would actually be better for our wingers. Another player if fit that can offer so much to the team is Hudson-Odoi. The youngsters creativity is insane considering he is only 19 and he offers so much on the pitch when he plays. The fact that Ziyech and Hudson-Odoi are now are potential wingers on that right hand side is tantalising and the english-man would do well to listen to someone like Ziyech. 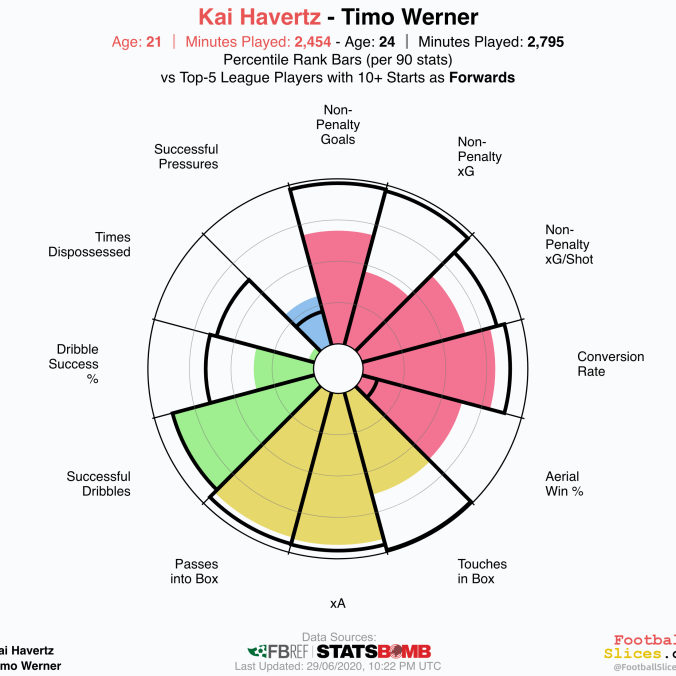 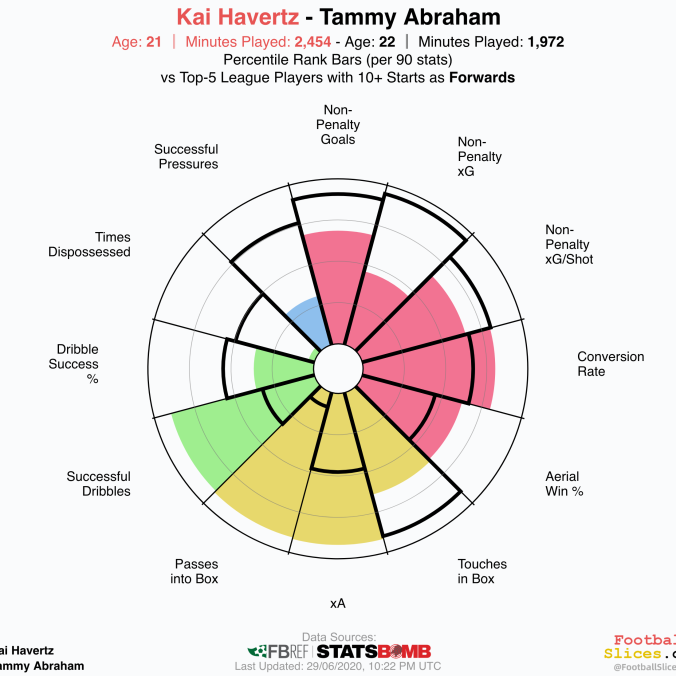 Post-lockdown we saw that Havertz was used as a forward by Bosch for a couple of games in which he got some goals as well. The young german’s versatility knows no bounds. Now Havertz lacks in comparison to Werner or Tammy when it comes to scoring goals but considering he played 2-3 games there the difference isn’t that much. Aerially he does better than Tammy and Werner’s height doesn’t help him in that sense so it can be ignored. In terms of passing and assisting Havertz again does better than Tammy and matches Werner. Havertz’s height and intelligence on the ball could be useful if he was stuck up top or used in a two. Havertz and Werner up top would be an interesting combination although with the likes of Giroud, Tammy and Werner all fighting it out Havertz is unlikely to be heavily used up top.

Havertz’s verstality makes him a player that Chelsea cannot miss although it is clear to see he would be best used as an attacking 8 alongside a Kovacic or Mount while someone like Kante did the dirty work behind them There are many options that Lampard could take depending on the situation, if we need goals then put RLC and Havertz in, or shift Havertz onto the wings or up top to create space for someone else in the team. Barkley will probably be heading out with someone like Jorginho also leaving the club but no one in that midfield should be particularly threatened by Havertz’s arrival. The wingers are in a competition of their own and its a healthy one. Giroud is getting older and will know that he will be used as rotation player although his professionalism and impact always make him useful and he could find himself playing alongside Werner if need be. One player who will need to step it up is Tammy though and I think he will because with the creativity of Pulisic, Havertz, Ziyech, Mount, CHO and Werner along with crosses from Reece he won’t have any excuses not to finish chances.

Havertz is a must buy and Chelsea will have money left over to spend on a left back and centre back as well.

One thought on “What could Kai Havertz bring to Chelsea?” Leave a comment ›