Chelsea take on 14th placed Crystal Palace on Tuesday night as we look to continue our push for finishing in the top four. Palace are comfortably mid table at the moment as they are well clear of the relegation zone and in around the race for top 10. Since football returned Palace have played 4 games winning their first game and then losing the next three to Man City, Burnley, and Leicester. Palace haven’t scored any goals in those 3 games and have conceded 8 goals so Chelsea should be licking their lips.

The game against Watford was a nice bounce back for the team but to be honest Watford offered little to no threat and Palace are also one of those teams which don’t really have anything to fight for at this stage. Overall Chelsea have the better squad and have plenty to fight for and so this has to be another 3 points to Lampard and team.

Tomori, and Kante will probably miss this game with Kante having picked up a slight hamstring issue against Watford. Kepa should continue in goal, with Reece James and Azpilicueta as the full backs. Christensen, and Zouma need to remain as the central defenders after a good performance against Watford. Jorginho would have been the choice to replace Kante in the CDM role but his pace seems to be keeping him out of the team so it might be that young Billy Gilmour gets another chance. Mount should also keep his place while Loftus-Cheek should get a start. Pulisic will probably start as well and I have a feeling Hudson-Odoi might get a chance as well. Tammy might return to the starting lineup for this game with Giroud given a rest. Lampard has plenty of players he can mix and match farther up the pitch but in the end getting the three points is the most important thing.

Palace should set up defensively as they have plenty of fast players that can play on the counter. Guaita is a good goalkeeper while they have Sakho back alongside Cahill in defence. Van Aanholt is always dangerous down the wings. Further forward Palace have the likes of Ayew, Zaha and Benteke all possible of causing problems. The bench also has the likes of Meyer, and Townsend. 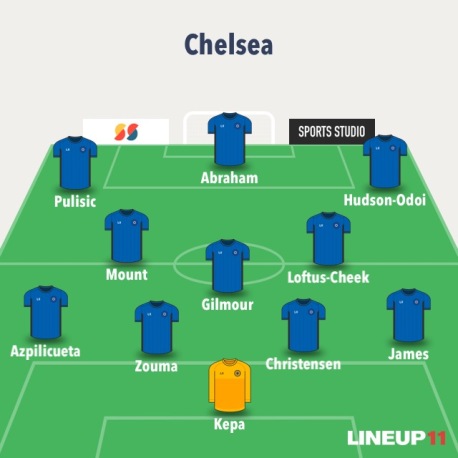 Tammy and Pulisic scored the goals in a 2-0 win in the reverse fixture and it would more than great for them to score again and for us to get three points. On current form I think we will and Chelsea have to win. COME ON YOU BLUES!!!