Chelsea travel to Manchester to play Man City at the Etihad for MW 35 of the Premier League season. This is the 3rd time Chelsea will be playing Man City this season after the reverse fixture and the FA Cup semi-final. This also happens to be the Champions League Final for this season. It’s safe to say both team’s players will know each other. City sit 13 points clear of Manchester United who are 2nd but United have a game in hand so if you take it as 10 points they still need a point or more to secure the title for this season. City have lost 1 game in their last 5 but other than that after what was a poor start to the season they have risen and went unchallenged for much of the rest. City reached their first ever Champions League final on Tuesday night and will be flying high after that.

Chelsea go into this game having sealed a place in the Champions League final as well and sit 4th in the table. A win would take us 6 points clear of West Ham and depending on results above Leicester. It would also take us to within 3 of Man United until they play later in the weekend. On the flip side a loss would keep us 4th but we could lose the gap we have created from the teams below us especially West Ham if they win their game. So fine margins all around. For Chelsea this is the beginning of a tough run of games to end the season with Arsenal up next followed by Leicester in the FA Cup, and the league and Villa to end the season. Tuchel said that it’s a quick turnover and the player’s will have to put aside the win against Madrid and refocus on the league. I personally think we could see some curve balls thrown but Tuchel tomorrow because the German will not want to give City any idea on how Chelsea could shape up in the final. All in all there is plenty to fight for in this game.

I expect Tuchel to make some changes to the team. Mendy should remain in goal for the game with Christensen, Silva, and Rudiger making up the back four. Reece James and Chilwell should start as the wing backs while Gilmour and Kante should start in midfield. Up front is always a guess but I think Ziyech, Pulisic, and Tammy could start up front. Now this is purely guess work because we have Arsenal next before an FA Cup final. I guess we could see key players like Silva, Chilwell etc rested for that game but that means we could see Mount against City as well. Either way it’s a solid team and it also leaves Pep scratching his head because it clearly isn’t our first choice XI at the moment especially not some of the players.

City’s next game after this one is on Friday night so I’m guessing Pep will field a strong XI. I think we could see a 4-3-3 of sorts with Ederson in goal. Zinchenko, Dias, Laporte, and Cancelo as the back four. Gundogan, Fernandinho, and Silva in midfield while Sterling, Aguero, and Torres start up front. A rotated XI for Man City as well because some of their players similar to Chelsea probably need a rest. One person I think could start would be De Bruyne especially because they would have 6 days between their next game. With Pep though it’s also a case of guess work when it comes to who he selects. 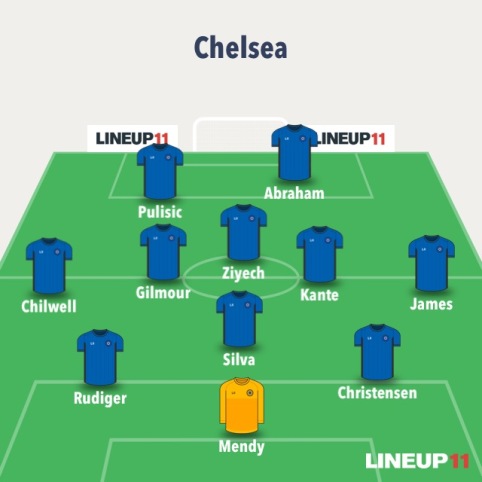 It really is a matter of when and not if City win the title but Chelsea will want try to make sure they don’t win it this weekend. Every game for Chelsea is a big game when it comes to top four hopes. One thing for sure is that the players selected will give it their all. A fun game to watch on Saturday. COME ON CHELSEA!!!