Chelsea take on Leicester for the FA Cup Final at Wembley on Saturday evening. Leicester have had a good run in the FA Cup starting with a win over Stoke followed by wins over Brentford, Brighton, Man United, and Southampton. Leicester have been really good once again this season and find themselves 3rd in the table as well. They have two tough games left in the league as well as this final to contend with. Brendan Rodgers has done a good job to create a solid team which is consistently challenging at the top end of the table.

Chelsea go into this game having lost to Arsenal during the week. It was a poor performance and a loss of our own making which put us right back into the race for top four. For now though the team need to focus on this final and a different competition. Chelsea beat Morecambe in the 1st game followed by wins over Luton, Barnsley, Sheffield United, and Man City. Was it the toughest run? No. The semi-final was very tough and we did well to show our quality on the night. Changing managers over the competition was not the easiest thing to handle either. Pre-match Tuchel said he was still hungover after the performance against Arsenal and that he was angry that the result wasn’t 3 points for the Blues. Tuchel also said that the players wanted to react and bounce back and that is what Chelsea will have to do. The fact is that Chelsea have 4 finals beginning with this game and every game has a reward if we win it.

Chelsea will have a fully fit squad for the game Tuchel announced. Kepa will remain in goal as well since he’s played every single game in the competition. Azpilicueta, Silva, and Rudiger should start as the back 3. Reece James and Chilwell should be the wing backs with Kante, and Jorginho in midfield. Mount, Ziyech and Werner should start up front. This has been our tried and tested lineup in the big games although I wouldn’t be surprised if one of Havertz or Pulisic start instead of Ziyech. We also do have a game against Leicester next week that we need to keep in mind which is also a massive game for the top four race. This is a strong team though and one that has beaten the best over the last few months. Chelsea will have to be wary of the pace that Leicester have and of course the midfield battle will be big.

Leicester and Rodgers have settled on a formation over recent games. Schmeichel in goal with Soyuncu and Fofana as the centre backs. Evans could make a recovery for the final but I doubt he starts. Pereira should come back in but play at left back with Castagne at right back. Ndidi, and Tielemans are the midfield threat while Perez, and Albrighton start on the wings. Up front Vardy and Iheanacho start and while Vardy has been struggling for goals his pace is always a threat and Iheanacho has been on fire over the last month or two. Plenty of threat from the wings and full back areas a dominant midfield and two lethal finishers up front. Maddison is a threat from the bench while some key players like Justin and Barnes are out injured. It’s a good team and can ready for the final. 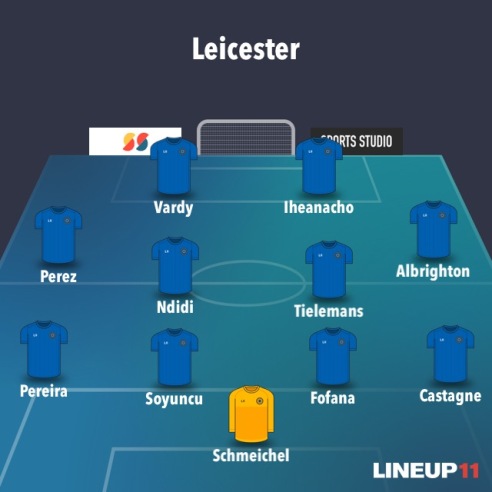 FA Cup Final, fans in the stadium after a long time, and a new home kit on display for Chelsea. We got here last season and we messed up against Arsenal. A lot of the players would have learned from that and hopefully they can channel that disappointment along with the frustration of the Arsenal league game to put in a great performance. COME ON CHELSEA!!!