Chelsea travel to the Vitality Stadium on Tuesday night to play Championship side Bournemouth in the first official pre-season friendly of this season. Bournemouth have had a couple of games in Spain and are under new management in Scott Parker who left Fulham during the summer. With the Premier League season a little over a fortnight away preparations have begun in earnest over the last 2 weeks as Thomas Tuchel looks to hunt down the table toppers.

A bit of a summary first on how the summer has gone so far for Chelsea. Jorginho, and Emerson were crowned European champions while Mount, Reece, and Chilwell were runners up. There has been very little on incomings with Chelsea quiet and on lockdown in terms of transfers. The latest proper news is that Marcus Bettinelli who is a goalkeeper and free agent should be joining the club in the coming days as a replacement for Caballero.

The outgoings have been a different story with several players leaving the club but not the ones many fans would have thought. Tomori has been joined by Guehi, Peart-Harris, and Lewis Bate who have officially joined Premier League sides Crystal Palace, Brentford, and Leeds respectively. They clearly wanted to play week in week out and good luck to them. Gilmour, Colwill, and a few others have left on loan for the season with Gilmour joining Premier League side Norwich City so it should be interesting to follow them. Several of the players that fans would have wanted to leave are still around though and have been taking part in pre-season.

Chelsea’s expected squad for the Bournemouth game should consist of goalkeepers Mendy, and Kepa. The defenders should be Sterling, Alonso, Zappacosta, Maatsen, Rahman, Clarke-Salter, Chalobah, and Sarr. Midfielders should consist of Drinkwater, Barkley, Gallagher, Baker and Loftus-Cheek. Up front we should have Pulisic, Ziyech, Hudson-Odoi, Musonda, Abraham, Ugbo and Broja available for selection. Now Rudiger, Werner, Havertz, Kovacic, Zouma, Kante, Michy, Kenedy and Bakayoko have returned to training but it’s only been 3 days so I don’t expect any of those players to play this game. The rest have played a game against Peterborough which they won 6-1 and have played an intra squad game which was a 1-1. Mendy and Kepa of course are part of the main team along with Alonso, Pulisic, Ziyech, Hudson-Odoi, and Abraham. Abraham might be on a move but for now he is part of the squad.

Players to keep an eye on in defence would be Dujon Sterling who is fit again and impressing at right wing-back. The rest might be playing for loans or a sale but Maatsen, Chalobah, and Sarr might have a small chance of making the squad.

They are players with potential. In the midfield Drinkwater, and Barkley should not be around for when the season starts and the same goes for Baker. Gallagher could get a loan to a Premier League side with Palace, and Leeds keen but Tuchel wants one last look at him before making a decision for the season. Loftus-Cheek is the one that might stick around for the upcoming season and looks fit again and hopefully he does impress.

Up front Ugbo is the only player who probably won’t be part of the squad. Abraham could be sold but until Chelsea aren’t sure a striker is coming in he will stick around. Broja has come back from his loan at Vitesse and has impressed in pre-season it is expected that if Abraham leaves Broja will likely stay. On the wings Pulisic and Ziyech have had their first proper pre-seasons at Chelsea and both have impressed in training. Hudson-Odoi is looking fit again and by all accounts he is raring to go on the left hand side. Musonda is back fit as well and might get his first minutes on the pitch.

Formation wise I think Tuchel will stick with the 3-4-2-1 or 1-2 but we could see a four at the back tried out in the 2nd half etc. Expect there to be many changes at half time as well.

Plenty to keep an eye on for this game and some will be wanting to show other clubs that they are worth the money. 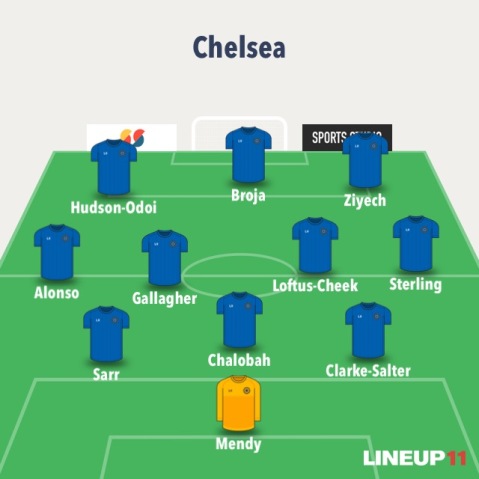 Again, these games are mostly about fitness but it will be good to see the likes or RLC, CHO, Pulisic, Ziyech, Sterling, and Broja play football and potentially grasp these chances before some of the other players come in. It will be an intense game as we know how Parker sides play but it should be a fun watch and what a great feeling to see Chelsea play again. COME ON CHELSEA!!!