Get back on track!

Chelsea welcome Leeds United to Stamford Bridge on Saturday for MW 16 of the Premier League season. The games are coming at teams fast at this time of year and another one is always around the corner. Leeds United find themselves 15th in the table this season. It’s not gone quiet as planned after the highs of last season mainly due to several injuries that Bielsa has had to deal with. Along with that is the fact that teams have learned how to counter Leeds in a way so the slow start has been a product of that. Relegation is not a possibility though and Leeds should stay up because the injured players should eventually come back. Out of the recent five games Leeds have only lost one but have drawn three and won 1.

Chelsea go into this game having lost to West Ham last weekend and drawn against Zenit during the week. The West Ham defeat was mainly due to individual mistakes once again and letting our guard down from a winning position while the performance in Zenit was a by product of many makeshift changes. The only positive I could take from the Zenit game was that Timo Werner scored two and Lukaku got one and we really need these players to hit form to pull us through this winter period. Like Tuchel said the intensity seems to be lacking recently and he wanted to say that it was mainly due to some phycological factor of allowing teams back into the game after we gained a lead. We all know the intensity that Leeds bring and even with their injuries they will still run for the whole 90 minutes and Chelsea will have to be able to match that and if we want to win return to our levels that we have shown this season.

Tuchel said that Chilwell, Chalobah, Kante, and Kovacic remain out due to injury and in Kovacic’s case Covid. Mendy should return in goal while the back three should be made up of Christensen, Silva, and Rudiger. Reece James should return to the more familiar right wing back position with Azpilicueta as the left back. Alonso could start but he would face a tough task against the pace of Leeds. For that reason we could see Hudson-Odoi or Pulisic start in that position as well. Mount, and Jorginho should start in midfield. Loftus-Cheek could start alongside Jorginho but he had a slight niggle and could come off the bench. Werner, Lukaku, and Ziyech should start up front for Chelsea. I think there will be plenty of space for Chelsea in this game and that could do wonders for Lukaku and Werner along with Ziyech’s passes. Havertz could equally start though. Plenty of ability from the bench with the likes of Pulisic, and Hudson-Odoi as well. Either way some key fresh legs in this game we can do very well, the main thing will be to return to our pressing and intensity from games before rather than the few recent games.

Leeds are without some key players like Phillips, Bamford, Rodrigo among a few others. Leeds should play with a back three with Meslier in goal and the back three made up of Ayling, Llorente, and Cooper. Dallas, and Firpo should start as the wing backs with Klich and Forshaw in the midfield. Raphinha, Roberts, and James should start up front. Some key players missing but still plenty of threat on the counter and Raphinha is their best player with the ability to shoot from distance and a wand of a left foot. 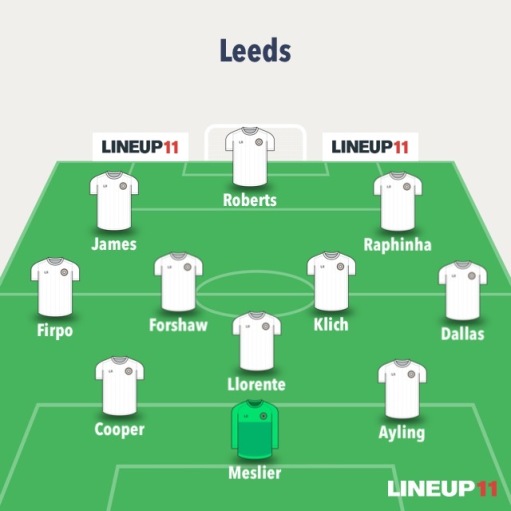 Trying to return to winning ways is never easy but this has been a poor run of our own making apart form the Watford game where we were genuinely poor. Tuchel made it clear that Chelsea would need to run their socks off for a win against Leeds and he is absolutely right. We need to bring back that intensity and we need to score goals and return that solidity at the back. A big game, COME ON CHELSEA!!!